The pen is mightier… 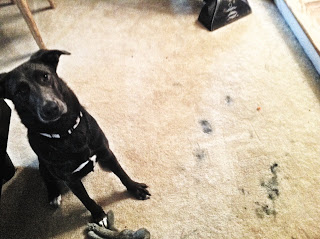 Having three dogs is awesome.  Their sweet faces, tail-wags, and “kisses” make us feel immediately adored.  But there are less emotionally satisfying scenes than, say, a dog greeting you eagerly at the door. Take this, for instance:
This is Tabitha, our youngest, by a new ink stain on our sitting room carpet.  You can see the wet-vac in the far right corner of the photo.  Yes, ladies and gents, the photo was taken after the cleanup.

Incidentally, the ink somehow hitched a ride on one of their toys and made a similar, though slightly less noticeable, stain in our TV room.

Even a house of professional students can underestimate the power a pen can wield.

Speaking Typing of pens, now to the academic segment of my post.  I’ve completely fallen in love with Twitter– for scholarly purposes, of course.  Other than my friends, my favorite groups/sites to follow are Medievalists, Al-Jazeera English, Gawker, Huffington Post, and Slate.  I posted yesterday about the A-J’s compilation of international responses to G/Qaddafi’s death, which I hope you found interesting, challenging, and revealing.

That I saw it on Twitter and reposted to a blog speaks to my next posted article from A-J, “Mass media, or public media?”  Its blurb reads, “The way communication is organised is developing as public societies encourage deliberations between equals.”  WAIT! Don’t give up! This is a really, really cool article, despite the brutally bumpy start.  Below is a slicker snippet describing the difference between public and mass societies.

In a public society the archetype of communication is a conversation between equals where ‘virtually as many people express opinions as receive them’ and ‘communications are so organised that there is a chance immediately and effectively to answer any opinion expressed in public’. A public, as opposed to a mass, can translate its opinions into effective action. It can change policy as its opinions change. In a mass society, on the other hand, the most characteristic form of communication is a broadcast that delivers one unanswerable voice to millions of quiet and attentive listeners. There is little or no scope for individuals to answer back to the messages they receive. There is certainly no way that the inhabitants of a mass society can translate their opinions into politically effective action.

Certainly, we can see what’s at stake here.  The article goes on to suggest that shortcomings in the media over the recent years have inspired “politically motivated publics” to assemble online and in person, having recognized that mainstream media’s coverage “doesn’t make sense, that the machinery of representative politics is broken, and that these two are aspects of the same problem.”


Here is the rest of the article. Enjoy!
Until soon, my fellow media participants.  Keep your pens on the ready– and away from pets.

The Art (s and Crafts) and Science of Facial Recognition