A short geology lesson and an epic tortoise tale

Happy New Year, and welcome back!
Last semester I researched Drayton’s use of the sea in Polyolbion and became increasingly interested in,  as my professor best summarized, “how England imagined itself in relationship to the world via the ocean.”  What does being an island mean?  How does being surrounded by water influence (especially national) identity?  I’m also wondering about the development of sailors in literature– certainly, they are not always stalwart navy men, fearless adventurers, or founders of great nations.  How do their identities mesh with those back on land?
One way to address these issues is to read about them; a less academic approach is to visit some islands and see for yourself.
Enter family trip to the Galapagos, an archipelago nearly 1000 km off the coast of Ecuador.  The people, tortoises, iguanas, sharks, and sea lions were all amazing.  Below is the view from our tented camp: 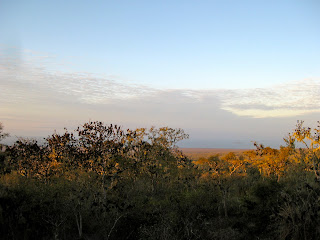 The Pacific is gorgeous, powerful, daunting.  Currents coming from three different directions are particularly strong and responsible for bringing the eclectic group of creatures (from Penguins to lizards) to these wildly isolated islands.  The wave in this photo is well over a meter high. 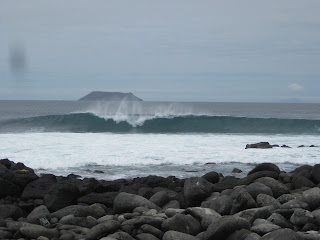 The archipelago emerged, island by island, over a hotspot on the Nazca-Cocos plate.  Over millions of years, an underwater volcano has erupted to form these islands, which sink and move away from their point of generation at a speed of around 7cm per year.  The plate that carries them is the very plate that goes under the mainland, causing the Andes to rise at a matching rate.  Recently, geologists have discovered the older Galapagos islands under the sea, now submerged after their turn in the sun.  Two of the islands are still active, but have not erupted as recently as Etna.

Speaking of Mt Etna, I chose Aeneid to read on the trip. Although we didn’t sail anywhere, reading about sailors tossed about the sea by Fate and the gods fit surprisingly well– not with our experiences, thankfully, but with the experiences of the animals ‘endemic’ to the islands.  It is theorized, for instance, that the tortoises floated here on driftwood.  How extraordinarily marked this species is–to bob around in the Pacific, arrive in numbers large enough to continue the species for millennia, and grow in global fame despite (and because) of its isolation.

It’s strange to consider all the other creatures– human and otherwise– who couldn’t land, but the sea is as creative as it is destructive. A recent expedition to a hotspot near Antarctica revealed a surprising number of newly discovered species well over a mile below the surface (article here).

I’m reminded of how often the ocean has been employed to imagine great strife and sometimes even greater triumph in literature. Yet the sea can defy metaphors it so easily creates: it is more than a representation of life v death; there actually is a vast expanse between civilizations; crossing it, on any vessel, is still a heroic feat.

If anything, this trip showed me that no better testament of the ocean’s power exists than its survivors, be they tortoises or kings.

On Onus of Ownership