Google Map and Google Earth allow people to add data to a location (see Wallace’s map).  The problem with these platforms is that there’s no way for the data to interact.  When I make a map of all the invasion sites mentioned in the Peterborough Chronicle, the information that pops up for each place will be isolated.  There isn’t  anything else for me to do with it, like search for “Danes” or “heathens” or “William.”

I’m hoping to develop a way to get the text of each entry to interact– an undertaking which has proven quite difficult to begin.  Once I have time to grow the project and incorporate all sites mentioned in the Peterborough Chronicle, having the right platform and database will allow users to search for things like invasions, fires, deaths or births of kings, miracles, and church construction.  It might also be able to limit searches based on areas or time frames.


From there, if I could get a team of scholars (and a grant) to incorporate each version of the Anglo-Saxon Chronicles, we could see some differences among them more easiy, than say, Thorpe’s translation: 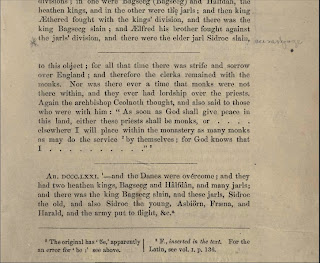 Thorough though it is, I find this very hard to follow.  Scholars of the chronicles need new ways to rethink these texts, on their own terms and in communion with each other.

Big picture, my project aims to locate the stories of these histories in a virtual space that will help readers reimagine the past.

But here’s what else I think it could do:
bring chronicles back to the classroom
employ digital media for medieval interests other than paleography and digital collections
reinvigorate the scholarly discussion of chronicles, which confront issues of empire, borderlands, nation-building, kinghsip,warfare, changes in the English language, the study of pre-printing book creation, materiality, and paleography
help us reimagine time as space

I’m excited to attend “Cartography and Creativity in the Age of Global Empires,” hosted by Duke’s BorderWork(s) Humanities Lab.  Here’s the description:

Please join us for this inter-disciplinary workshop, which brings into conversation historians, literary critics, artists, geographers, and the digital and spatial humanities to explore the nexus of mapping, art, and global empire. Our day-long discussion will investigate the consequences of treating maps as “image texts” and also the manner in which modern mapping practices have been engaged by artists across a broad range of image media for understanding the acts of demarcation that have parceled the world into sovereign bounded communities as well as contemporary challenges to these borders, boundaries, and lines of control.
And here’s the website: http://sites.duke.edu/borderworks/borderworks-events/workshop/
Hopefully I’ll have more to report back soon.  In the meantime (and even after), I’d love to know what you think.