On Beowulf, Unferth, and the Lance scandal

I was lucky to begin teaching my first literature sections with Beowulf and some smaller Anglo-Saxon poems this morning. Teaching at 8 and 9am can be rough, but the students can be quite promising—they are, after all, those who signed up for class at 8 or 9am. And yet, not all of them are the go-getters that we’d all love to teach; some are the slack-asses who forgot to look at their sections, or who registered so late that they ended up here on accident. There’s really no telling what will happen.
I was THRILLED by my 8am class. It started slowly, as it should, but an attentive and interesting group emerged as the time passed. I got some thank-yous and follow-up questions at the end, which bodes well for a group of curious students.
My 9am class was brutal. Very few were responsive; very few were engaged; many looked annoyed. None of my warm-up strategies worked—it was difficult to get them to talk about what they didn’t like in the poems and impossible to get most of them to loosen up, chuckle, or seem engaged. Of course, there were the “happy few” who jumped in, but the vibe was all wrong.
And I didn’t help myself, either. After asking them to find an example of synechdoche (which I mispelled on the board), I waited through a few minutes of predictably awkward silence. When I broke it, I pointed out that no one could find anything because no one had marked in the book; I explained that reading without reading actively was a waste of time. I showed them my oh-so marked up text, and we all agreed that it’d be easier for me to find an example because of my annotations.
A hand went up.
I called on its student, who asked:
“Can you find an example for us?”
SURE I CAN.
…
…
…
Shit.
So much for establishing my credibility in a class full of skeptics!  I actually ended the class with, “Well, I hope your weekend will be better than your morning.”
UGH.
Thankfully, a thoughtful student came up after class with a question she’d brought up in an email. She asked why, in a warrior society like Beowulf’s, Unferth’s envy of him was so big a deal. Competition drove much of their culture, so why was the man who challenges Beowulf portrayed as such a bad guy?
Some brief background: when Beowulf arrives in hopes of killing Grendel, he introduces himself with a series of boasts to 1) establish his lineage and identity, and 2) show justification for the Danes to trust him. An introduction like, “Hey, I’m Beowulf. I’m soooooo good at what I do—I’m such a badass. I’ve killed tons and tons of creatures because I’m awesome. By the way, my family tree is ridiculous. Do you know who my dad was?!” is a bit off-putting to contemporary readers, but one can see the usefulness of the verbal CV to a community plagued by invasion.
In any event, when Beowulf arrives, Unferth is a bit moody. In Seamus Heaney’s words, Unferh “spoke contrary words” because he was “sick with envy” when he suggests that Beowulf’s swimming match with Brecca was motivated by vanity rather than glory. Moreover, Unferth protests, Beowulf didn’t win the race as he claims; Brecca “made good on his boast upon you and was proved right.”
Beowulf responds by bringing something new to the story—sea monsters. He claims to have killed nine of them in the race and, marked by fate, was shown to be the stronger swimmer. Rendering his opponent’s rhetoric as silly, childish brattiness, Beowulf notes: “The fact is, Unferth, if you were truly as keen or courageous as you claim to be Grendel would never have got away with such unchecked attrocity, attaks on your king.”
Can you feel the sting?
It seems, then, that competition is important to Anglo-Saxon society and their continental kin, but equally important is what we might call sportsmanship. If someone beats you, fine—give him the gold (or horses, or kingdom, or whatever) you promised and get on with it. There’s very little room for bitterness in a world so marked by interdependence and so desperate for safety. Yes, the hero gets the goods, the fame, the earthly (and perhaps heavenly) glory, but that’s something to celebrate and, even more importantly, something that is likely to benefit the entire community.

But is this the same today? When I saw that Lance Armstrong had given up his fight against doping claims, I wondered if he’d been just run down by thousands of Unferths bitter about his successes and their own weaknesses. But perhaps they are right; there’s certainly some evidence of Armstrong’s drug use. As an ex-runner, I’m still upset by Marion Jones’s abuse; I had looked to her as a great female role model. As an Austinite who saw Lance bring together a community, open up the sport of cycling, and help my friend dying of cancer, this news is even more upsetting. 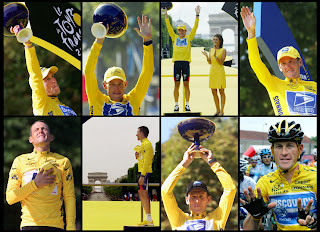 If, like the Anglo-Saxons, we benefit from our heroes’ successes, in what way to we reap the reward? If they don’t compete for fame, for glory, why do they compete? More importantly, for whom do they compete? Don’t they know the risks their taking with our trust, our pride, and our support? Does unity forged in a lie keep its bonds, or will it unravel with the truth?

In this literature, the hero is welcomed and rewarded by the community he helps to save or he is buried by those he fails. In either case, there’s no cheating—especially not fate.