Still want to be a medievalist? Volume 1

Hooray! You made the right call. You should know, though, that many of your days and nights will feel (and actually look) like this:
I got such great feedback (and so many retweets!) that I decided to go ahead and fill in some of the blanks in yesterday’s taxonomic chart).

But let’s start from the beginning.

Once upon a time at a University on a Hill, a wise man named Professor W started a series of flashcards for grad students. As the years went on, each student added his or her own relavent resources. The age-old hoard as now come down to me. Behold, the UNC medievalist-qualifying-exam-research-method-flashcards, now with a few DIGITAL sources.

I. Looking for primary sources, Old English
A. Prose
1. English Historical Documents: Heartsies for this one! Of the twelve volumes, only the first four deal with medieval documents. They are broken up according to the following years: (500-1042), (1042-1189), (1189-1327), (1327-1485). Special prize to whomever can guess the reason for the date breaks! Each edition provides a translation of chronicles, laws, and charters in addition to an introduction to the period, secular narrative sources, and ecclesiastical sources.
2. Die Gesetze der Angelsachsen: spoiler alert– this fella’s in German. First published in the early (very early) twentieth century, this resource provides an edition of Anglo-Saxon laws; text is in Anglo-Saxon, German, or Latin. Some can be found in slightly modified context at earlyenglishlaws.ac.uk. The entire book is accessible online through achive.org. Word searches come up on a nifty little “timeline” at the bottom of the page.
3. Rolls Series: with a nickname like “Chronicles and Memorials of Great Britain and Ireland during the Middle Ages,” this has to be good. Although all 99 volumes spanning 255 books are still striclty bound in the DA section of your library, the index can be found online: www.the-orb.net/rolls/html
4. PASE Database: Really, I’m at a loss for words with how AMAZING this resource is, so I’ll use their words instead: “The Prosopography of Anglo-Saxon England (PASE) is a database which aims to provide structured information relating to all the recorded inhabitants of England from the late sixth to the late eleventh century. It is based on a systematic examination of the available written sources for the period, including chronicles, saints’ Lives, charters, libri vitae, inscriptions, Domesday Book and coins; and is intended to serve as a research tool suitable for a wide range of users with an interest in this period”(http://www.pase.ac.uk/index.html). On the fence about being a medievalist? Spending five minutes on this website will push you right over, and into the [loving? strapping? capable?] arms of Stephen Baxter and Simon Keynes.

B. Poetry
1. Online Corpus of Old English Poetry: You’ll notice that this resource actually starts with “Online.” Win! this project aims to collect and share “all known Old English poems and poetic lines in bare-bones editions with clickable glosses…and minimal, mainly textual notes” (http://www.oepoetry.ca/). As of 2010, there are very few OCOEP editions available, but there are tons of links to Georgetown’s Labyrinth Library. You can search by title or manuscript. Pull this up next time someone asks you how hard it is to work with so few texts.
2. Anglo-Saxon Poetic Records: Volumes are organized by manuscript, and there’s no index, so you’ll have to know what you’re looking for (or just browse it for fun). published by Krapp and Dobbie, you’ll see this in footnotes everywhere. Each volume contains the texts and notes.
C. Manuscript
1. Catalogue of MSs Containing Anglo-Saxon: When you hear someone say “Ker,” you need to be sure to maintain eye contact, sit up straight, and nod with agreement to whatever comes next. Check out his entry in the Oxford Dictionary of National Biography (also on this list). The catalogue was published in 1957 to include ALL manuscripts with Anglo-Saxon in them (except cartularies). Each entry describes the manuscript and its contents, even including glosses, notes, and scribbles. The 412 entries are organized by library; the 1991 appendix includes manuscripts written by continental scribes.
2. Early English MSs in Facsimile: Every now and then we all need a little manuscript fix. Don’t want to leave home? The publisher’s website for this series is your ticket: http://www.rosenkilde-bagger.dk/Early%20English%20Volumes.htm. In ‘real life’ each volume introduces and describes the manuscript (even tracing its history, if possible). All Old English manuscripts are reproduced. 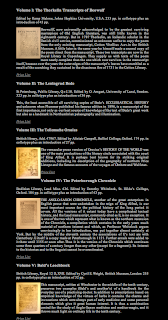 Until next time (info on Middle English resources), wishing everyone happiness in research.

So you want to be a medievalist…

Still Want to be a Medievalist, Volume 2: