I recently had the pleasure of presenting my mapping project at SHARP‘s Digital Projects Showcase. I’m in the middle of writing a reflection/call-to-arms on my experience there, but wanted to share my materials sooner. So here they are: images from my handouts and the newest version of the map.

WHAT IS THE ANGLO-SAXON CHRONICLE? 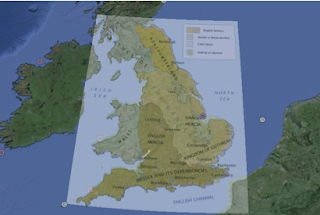 A group of annalistic texts begun in the 9th century and, in one case, extending until the 12th.
It includes a variety of events: birth of Christ; natural and supernatural phenomena; royal births, coronations, deaths, and burials; consecrations; invasions; laws; property endowments; international and inter-family drama; the building (and burning) of towns.
A: the earliest surviving manuscript of the Chronicle; end date 1001; significant interest in Winchester
B: irregular annal numbers; end date 977; updated regnal list from A
C: “chronicle of chronicles” because of its sources; ends in the middle of 1066
D: integrates/conflates sources incorporated by C as one chunk; ends 1079; northern interest
E: longest chronicle version; end date 1154; begins in Old English and ends in Middle English
F: Bilingual
G: Copy of A
WHY MAP THE ANGLO-SAXON CHRONICLE?
In content alone, the Chronicle is an important part of early English history and literature (listory? histerature?) And unlike its contemporary chronicles on the European continent, it is uniquely vernacular. Some versions contain important regnal lists; some include poetry; they all tell a different story of England, documenting in varied narratives of the arrival of Brutus, Angles, Saxons, Vikings, Normans, missionaries, and bishops. Version D has the longest treatment of a woman in it, describing (and perhaps defending?) Margaret of Scotland’s marriage. The same version (D) actually ends mid-word in the annal entry for 1079; version C ends halfway through the entry for 1066—on the Stamford Bridge—and before the Battle of Hastings.

Although annals seem to be primarily focused on time, these are actually just as preoccupied by space. Indeed, location is so important to these texts that until recently, most were referred to as the chronicle of a place name: Winchester Chronicle, Abingdon Chronicle, Worcester Chronicle, and Peterborough Chronicle.  But these names didn’t only show the onomastic interest of the chronicles’ contents; they more accurately reflect the scholarly effort to trace their transmission history—multi-layered narrative. 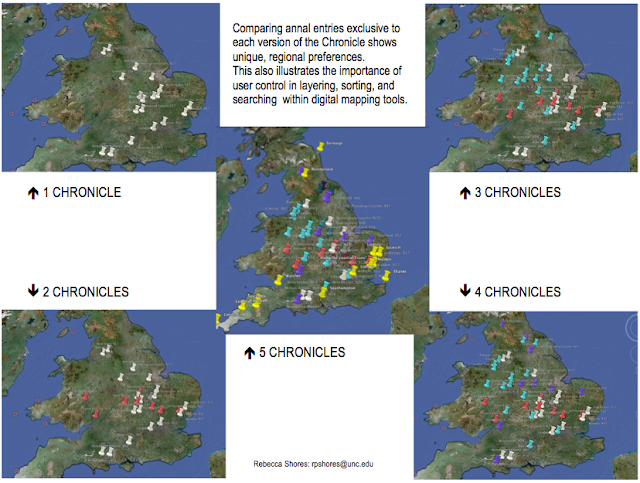 TEACHING WITH THE CHRONICLE MAP

PROBLEMS WITH MAPPING?
There are plenty of issues surrounding the cartography of complex texts. Here are some that I dealt with in Google Earth:
1) The map of Anglo-Saxon “England” changes over the course of these texts: 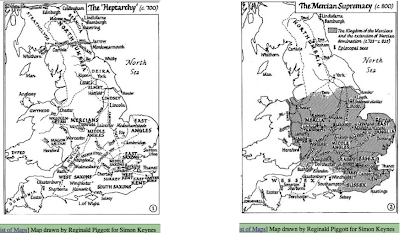 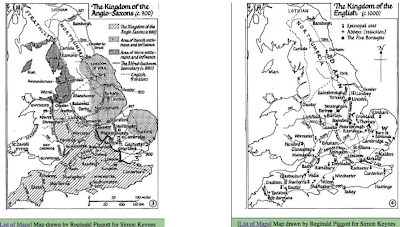 2) The transmission histories are complicated, at best:

3) There are practical issues of data selection and entry when not all annals have traceable place-names:

But Google Maps Engine has just come out, and that’s allowed me to sort and change displays.

BEHOLD, THE ANGLO-SAXON CHRONICLE MAP 2.0!
It sorts data by date and label by event (or vice versa): 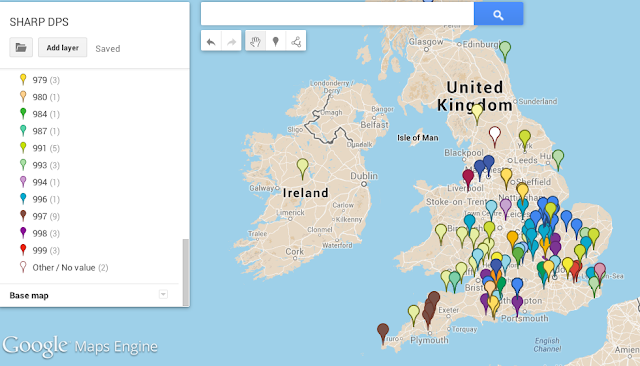 It allows me to build a database within the mapping program itself: 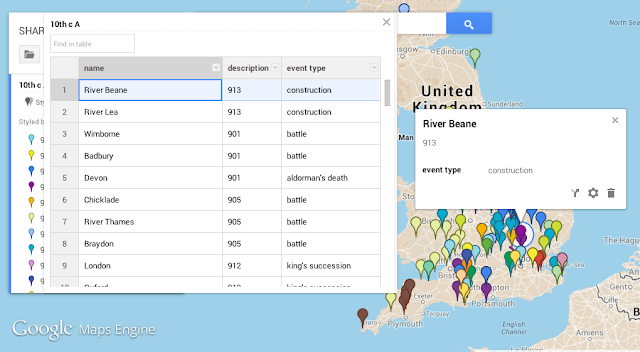 Still, there are some kinks to work out before I move forward. Consider, for example, what happens when I try to map regions like Wessex and Mercia:

It’s not a pretty sight! Nevertheless, I’ve gotten great help from the UNC librarians and fellow SHARPists. More on both very, very soon.
Til then,
Map on!

"I am an Anglo-Saxonist" or, What a Medievalist Looks Like