What do the sheep say?

It was the little knight‘s turn to pick the text for #WhanThatAprilleDay16. In light of his favorite Easter toy (once his dad’s),

and in keeping with my recent interest in sounds of the past, he chose the short catalog of animal sounds in Aldhelm’s De metris et enigmatibus— a treatise on poetic meter.

Aldhelm was a seventh-century Anglo-Saxon, but according to Susan Rankin of Cambridge, “[t]he catalogue of words describing the sounds made by animals– or uoces animantium (animal voices)– goes back at least as far as the mid-fifth century and survives in various textual traditions” (Cantus Scriptus, 13). 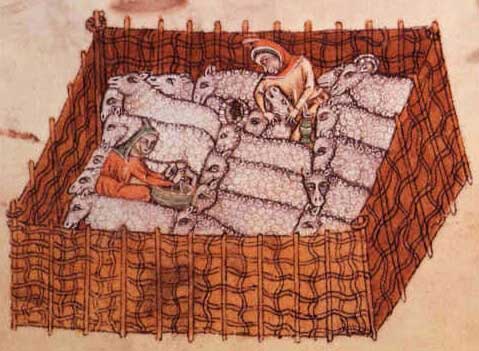 For Aldhelm, this list helped distinguish the human, signifying voice from non-human, non-signifying noise. To learn more about classical and early medieval classifications of vox and sonus, look at Rankin’s “Capturing Sounds: The Notation of Language” in Ransom and Dillon’s Cantus Scriptus: Technologies of Medieval Song.

The text appears on an eighth-century leaf bound with a ninth-century copy of Isidore’s Etymologies. Rankin’s transcription is partial, so I’ve included the manuscript  below.

Can you guess which animal is which? Reading aloud will help (and remember, they’re  plural animals). You can also take a quick listen to my recording of Rankin’s excerpt.

By the way, this is a really fun way to introduce yourself (and/or your toddler) to any language. So may your spring be abuzz with sounds– ancient and animal alike!

Consolations of sound: echoes of medieval peregrinatio in modern-day parenthood