Now that I’ve taken my major exams, I have a moment to reflect on how thankful I am to get all kinds of support from all kinds of people. One particularly surprising source of support has been Twitter, through which I’m able to be in touch with other medievalists around the world. One of the many perks of having an intellectual (if digital) community is that we can learn from each other in (almost) real-time and help one another in various stages of research.

I’ve reached out to fellow graduate-level-medievalist-named-Rebecca, MedievalBex, whose blog I’ve written about already. She was kind enough to contribute to my previous post on interviewing medieval authors about Arthur by adding in the authors of Annales Cambriae and Mabinogion.

So here’s the post from last time, made better (as all things are) by collaboration.
Until soon, wishing everyone a well-networked week.

Let’s imagine a time machine that, instead of taking us somewhere, just brings interesting folks into the present–that way we don’t have to worry about changing, packing, etc. Brilliant!

Next, pretend that with this magic machine, I’ve brought some of the Arthurian authors into my home (thinking the campus coffee shop will be a little too much).

Amidst all our revery, I’ve asked them who they think Arthur was. Here are their answers:

Gildas (6th c): “No clue, but did you hear about the Battle of Mt Badon? It was epic, really.”

Nennius (9th c): “Hmmm. Sounds a little like the dux bellorum. Helluva guy. Good leader in battles, but not much outside of that.”

Annales Cambriae writer (10th c): “The Battle of Badon – Arthur carried the image of the Virgin Mary and won. Yay! The Battle of Camlann – Arthur and Medraut both fell and there was devastation in Britain. Boo.”

Wace (12th c): “A king TOTALLY DISGRACED by his love-triangle. What a shame. Oh but can I just add one thing? For the sake of history? The Round Table thing…probably not real.”
Marie de France (mid 12th c): “Qui est Arthur?”

Layamon (late 12th c): “King Arthur was a war-leader, a lawgiver, and a thoroughly Christian king. Also, fairies were present at his birth. That doesn’t change how warry and Christiany he was, but they were there. For sure.”

Stanzaic Morte author (14th c): “The king of Camelot, clearly– he’s the one with the huge military campaign in the made-up kingdom? You remember… the one who died because his best knights couldn’t settle their differences? Oh and there was that terrible Modred fellow.”

Chestre (mid 14th c): “Husband to that total b___ who almost ruined a really cool knight. Thankfully, said knight eventually got to live in fairy land with his magical chica. Hot.”

Alliterative Morte author (late 14th c): “Arthur was a warrior king who performed in and witnessed many battles. You should have seen his armor! And his weapons, and his horse, and all his crazy moves. And do you know about his ships? Also, will this take long? I have a battle re-enactment to attend.”

Mabinogion writers (14th c, or earlier): “Oh look, a magical boar! Ooh, and over there, a shapeshifter! OOOHH and a woman made of flowers!! Oh yeah, and there’s King Arthur too. But mostly magical stuff.”

Malory (mid 15th c): “Arthur was an acquaintance of Sir Lancelot, the greatest knight EVER.”

Oh no–someone brought up Bede and now things are getting a little heated. I’m sending these strangers home before something disastrous happens.

I started this blog because my academic life is so often reflected by my suburban one. Coincidences happen as often as you look for them, as it turns out.

Yesterday I finished prepping for Malory’s Le Morte Dartur. Once I wrote it up on my wall of triumph, I took my congratulatory wine glass up to bed and looked for a TiVo’d movie. And what did  I find? The 2004 not-even-near-blockbuster, “King Arthur.”

This was clearly an act of fate. And I’m an Anglo-Saxonist, so I know allllll about fate.

Behold, the ever-furrowed brow of the tormented but resilient hero: 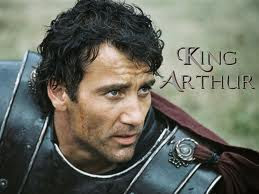 And the rescued, single-parent, sex maven/ liaison to Merlin: 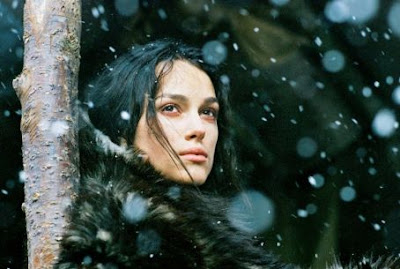 I was surprised– tickled, even– that the director had stuck to the “original” (ahem) 5th century setting, around time of the sack of Rome.

Most people associate Arthur with the later Middle Ages because writers like Malory were 14th or 15th century authors of chivalric romance. Though writing of better days long past, they imported their own cultural necessities into the stories, bringing tales of long ago into contemporary frameworks.

But still, how did this transition happen?

Here’s a brief run-down of the Arthurian tradition, derived from Shepherd’s critical edition of Malory:

410: Rome withdraws from Britain
5th-6th centuries: “Various historical records” make note of an unnamed British warlord’s successes against invading Angles and Saxons
late 6th century: Welsh poems attribute supernatural powers to a warrior named Arthur
c 800: Welsh chronicle Historia Brittonum documents a dozen victories of Arthur, dux bellorum (leader of battles), over the Saxons.
c 1000-1100: “Development of a body of Welsh Arthurian tales with much marvellous content,” some of which may indicate “the Celtic origin aspects of the Grail quest”
1140: Geoffrey of Monmouth cobbles together different bits of Arthurian lore and becomes the source for most subsequent treatments of the legend.
1155: Wace’s Anglo-Norman Brut incorporates much of Monmouth, adds the Round Table, and, perhaps most importantly, “‘moderniz[es] Arthur’s court into a chivalric institution.”
1190: Layamon translates Wace’s work, making the “first Arthurian retelling in England”
The rest of the twelfth and thirteenth centuries saw the development of “non-courtly” renderings as well as highly Christianized stories of the individual knights, all in addition to the French prose Vulgate Cycle.
The fourteenth century witnessed the construction of the Winchester Round Table, the establishment of The Order of the Garter, and the composition of Middle English’s alliterative Morte Arthure and stanzaic Morte Arthur.
Malory began (and probably finished) his Morte Darthur in prison in 1470. He died a year later, in the middle of the Wars of the Roses.

For a more in-depth look at some of these sources (as well as some sources I’ve left out), check out the inimitably awesome blog of Medieval Bex:http://medievalbex.wordpress.com/

So now, back to the movie, appropriately set at the autumn of the ancient ages (Huizinga wink).

We’re off to a good start with the handsome cast and the approximate historical time period. But it all kind of crumbles from there.
I worried that watching this after reading so much of the Arthurian tradition would confuse me, but it turned out to be a great test of my knowledge. Consider, for instance,  Lancelot, depicted with two swords:

I saw this and proudly told Drew, “No! The knight with the two swords is Balyn!” Yay me.

But Arthurian legends–in any of their countless iterations– are not ever really about accuracy, anyway. The earliest stories were tales of bravery in the face of slaughtering invaders; the later authors replaced episodes martial valor with those of marital fidelity as the concerns of the works became increasingly interested in courtly affairs.

Taking its cue from Braveheart, our 2004 rendition takes freedom as its primary lesson/ theme. 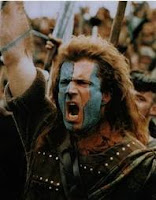 And this anachronistic emphasis on personal (yet also national?) freedom isn’t all these two movies share. They share something else: face paint.

We all know that Braveheart is about a 13th century Scotsman who rides around trying to act like Mel Gibson. Nevertheless, there is some measure of authenticity in the iconic face paint the warriors wear. This tradition came from the Picts– the pre-Scotland Scots, if you will– who were so named for being “painted.”

And guess what? GUINEVERE IS ONE OF THEM. Yep. Guinevere sheds her already ill-fitting clothes for a battle bikini, paints her whole body blue, and goes crazy on some blonde-haired viking invaders. 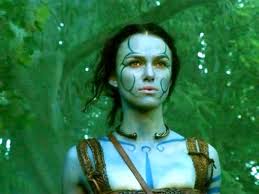 And that reminded me of someone else:

I know, I know. Your mind is blown.

Well, there’s much more to be said about the Arthurian tradition, and hopefully I’ll be able to share more thoughts on Malory, Launfal, the Lady of Shallot, Havelok, and Horn.

But for now, I must return to the reading list.

Until next time,
wishing one everyone a surprisingly relevant TiVo experience.